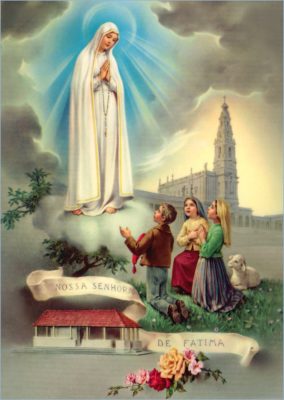 On May 13, 1917, Our Lady of Fatima appeared to three illiterate shepherd children, Lucia, Francisco and Jacinta, in the small village of Fatima, Portugal.  The children were tending the sheep and building themselves a playhouse.  They saw a flash of light, thinking it was lightening, they decided they better get the flocks and go home.  Before they could herd the sheep and depart, Our Lady appeared to them on the top of a small oak tree.  Lucia, the oldest of the three, age 10, spoke to Our Lady and asked her where she came from.  Our Lady replied that she came from heaven.  Lucia then asked what Our Lady wanted of her.  Our Lady told the children that she wanted them to come on the 13th of the month for 6 months and she would later tell them who she was and what she wished.  Lucia then asked a third question; will I go to heaven?  Our lady assured her that she would go to heaven.  Will Jacinta and Francisco, her cousins and companions, also go to heaven?  Our lady again assured her that yes, they too would go to heaven, but that Francisco would have to say many rosaries before he would gain heaven.  Our Lady then taught them the “decade” prayer and asked them to say it after each decade of the rosary.  In addition, she asked them to say the rosary every day, for peace in the world and an end to the war.  She then departed.

It was during the June 13th appearance that Our Lady again assured the children that they would go to heaven.  This time Our Lady said that she would come for Francisco and Jacinta, very soon, but that Lucia would remain for some time longer in order to make known the message of Fatima.

During this Corona Virus pandemic that we are experiencing, it would be spiritually rewarding to revisit the deaths of the two little shepherd children who saw Our Lady, Francisco and the Jacinta.  It was in January 1918, that the Spanish Flu, the most deadly pandemic in recent history, spread throughout the world.  Our two littlest seers, Francisco and Jacinta, along with countless others contracted the Spanish Flu.  During their illness they maintained the practice of their daily rosaries and offered all of their pain and suffering for the conversion of sinners, just as Our Lady had taught them.  Each of them knew that they were not to be spared death in their illness, yet they persisted in their mortifications and prayers, looking forward to their heavenly reward.  Sadly, it was from the Spanish Flu that each of them died, Francisco in April of 2019, at the age of 11 and his little sister Jacinta in February of 2020, at the age of 9.  True to her word, Our Lady took each of them to heaven, our assurance of this from their Canonization to Sainthood on May 13, 2017, one hundred years after the first Apparition of Our Lady.