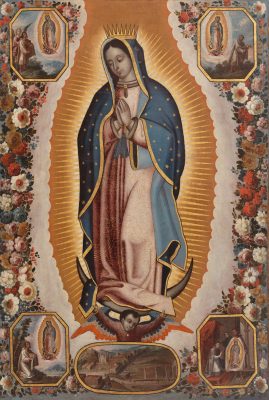 After Our Lady’s appearance the Church experienced its most prolific conversion in the history of the Church.  It is estimated that nine years after Our Lady’s appearance there were over 10 million conversions by the Aztecs to the Catholic Faith.  As these conversions were experienced the practice of human sacrifice disappeared.  Our Lady’s visit occasioned such a change of heart in the Aztecs, that human life was restored to the dignity that God intended.

Once again in human history we are experiencing human sacrifice, we call it abortion.  In the last 50 years we have sacrificed over 45 million babies.  It is time now to invoke Our Lady of Guadalupe to intercede for the unborn and once again occasion a change of heart so that human dignity may one day soon be fully restored.