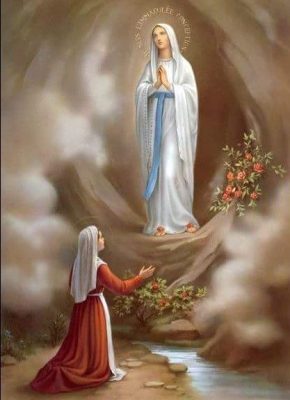 On February 11, 1858 Our Lady appeared, in Lourdes France, to a young peasant girl named Bernadette Soubirous.  Bernadette was a simple 14-year-old, with little education and a lack of catechesis.  During this first apparition Our Lady did not speak to Bernadette, she just appeared within the grotto and then disappeared.  In fact, it was not until the third such appearance that Our Lady spoke to Bernadette for the first time.  It was then that she asked Bernadette “would you do me kindness of coming here for 15 days?’.  Imagine, the Mother of Our Lord making such a humble request.

Bernadette did as our lady requested and came to the grotto, even against the wishes of many.  It was at the ninth apparition that Our Lady asked Bernadette to drink of the water of the spring and to wash herself there.  Bernadette quickly moved to go to the nearby water, but Our Lady indicated that the spring she wanted her to drink of was there, in the grotto.  In total obedience and faith Bernadette did as our lady requested.  Bernadette looked all around her to find this spring, not finding it she started to dig within the ground in front of her.  Finding a small bit of muddy water Bernadette drinks of the mud and smears if on her face, as if to wash her face, just as our lady had requested.  The onlookers laughed and mocked Bernadette for these actions, think her mad.  But much to the amazement of many, exactly where Bernadette had dug, water started flowing.  At first it was small and quite muddy, but as it continued to flow the water became clearer and soon a spring was indeed flowing.

This spring still flows today. These waters at Lourdes are said to be “miraculous” and have been the source of cures for many people.  Millions of people go to Lourdes each year seeking miraculous cures with this “heavenly spring”.  Many people are physically cured through their faith in these waters and many others are spiritually “cured” through the witness and devotion of all those who visit Lourdes.