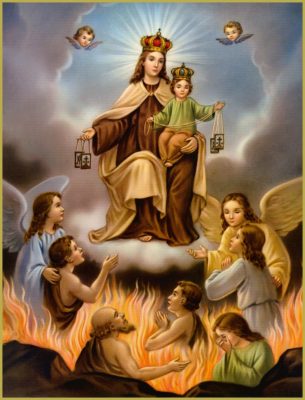 Many people today, while they might be familiar with the title of Our Lady of Mount Carmel, are not as familiar with the devotion of the Brown Scapular that was given by Our Lady of Mount Carmel.  The year was 1251, the date was July 16th, and the chosen recipient was St. Simon Stock, the superior-general of the Carmelite Order of the first chapter of Carmelites in England.

As a bit of history, the Carmelite Order traces their origin all the way back to the Old Testament.  It began on Mt. Carmel where the prophet Elijah lived as a hermit.  At the time, Israel was besieged by a terrible drought and the prophet Elijah was praying to God for salvation from the drought.  Each time he cried out to the Lord he would send his servant up the mountain to look for rain.  Seven times he cried out and on the seventh petition the servant returned with news of what appeared to be a rain cloud.  The heavens opened up and the rain began to fall.  The prophet Elijah saw the cloud as a sign of the Virgin, who would bear the long-awaited Messiah that had been foretold by the prophet Isaiah, of course, we know her as the Blessed Virgin Mary.  The prophet Elijah and his disciples continued to live on Mt. Carmel and to pray for the Virgin and the coming of the Messiah.

It was from these hermits, disciples of the prophet Elijah dedicated to the Virgin, foretold by the prophet Isaiah, that the Carmelite Order received its heritage.  To this day the Carmelites have a special devotion to the Blessed Virgin Mary, in particular as Our Lady of Mt. Carmel.  As the Crusades were waged, in the Levant, the Order fled to the west to avoid persecution by the Saracens.  At the time of St. Simon Stock, the Carmelites were a small Order fighting for survival.  On July 16, 1251 St. Simon Stock knelt in prayer imploring the Blessed Virgin Mary to grant her protection over the Carmelite Order.  Our Lady appeared to him holding the Christ Child and the brown scapular.  Our Lady of Mt. Carmel promised St. Simon Stock that anyone “dying in the habit” would be saved by her special grace.  While the Carmelite Order wears a large scapular as a part of their habit, the small devotional brown scapular may be worn by the lay faithful with the same promise of salvation attached.

The brown scapular devotion may be practiced by anyone as a devotion to Our Lady.  In order to practice the devotion, one needs to be enrolled by a priest, and wear the scapular on their person every day.  In addition, one must pray a rosary each day and observe chastity according to their state in life.  The importance of the daily rosary cannot be overstated. The rosary and the brown scapular go together in signifying true devotion to Our Blessed Lady.  When Our Lady appeared at Fatima, during the October 13, 1917 miracle of the sun, Lucia, the eldest seer, saw Our Lady appear as Our Lady of Mt. Carmel, signifying the importance of the two devotions: the rosary and the brown scapular.