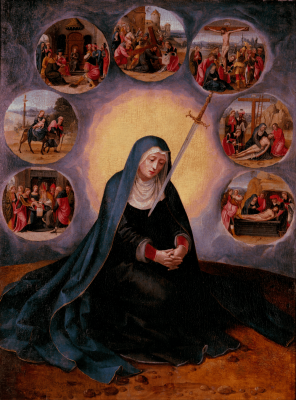 For most of us, when we hear the mention of Our Lady of Sorrows, we see in our minds an image of the Blessed Virgin Mary at the foot of the Cross. While this image is wholly appropriate, it certainly does not convey the full significance of this particular title of Our Lady.  In actual point of fact, we honor Our Lady of Sorrows in seven different sorrows suffered throughout the life and death of her Son, Jesus Christ.

The first such sorrow is experienced shortly after the birth of Our Lord.  When Mary and Joseph take the infant Jesus to the temple for his presentation to the Lord, they encounter Simeon who tells Mary, “Behold, this child is destined for the fall and rise of many in Israel, and to be a sign that will be contradicted (and you yourself a sword will pierce) so that the hearts of many may be revealed” (Lk 2:34-5).  These words of prophecy spoken by Simeon, which Mary would carry with her throughout the remainder of her life, become her first sorrow.

Mary’s second sorrow follows closely in the wake of the first.  King Herod, aware that a new King has been born, orders the slaughter of all young male children.  Joseph is warned to take Mary and the Child and flee to Egypt (Mt 2:13-15).  This second sorrow is for their time of exile and the martyr of the Holy Innocents.

The third sorrow of Mary comes years later.  Jesus is twelve years old and Mary and Joseph take Hm to the Temple for the feast of Passover.  Upon their return to Nazareth, they are one day’s journey from Jerusalem, and they discover that Jesus is not with them.  They return to Jerusalem in search of the Child, finally finding Him in the temple after three long days of searching (Lk 2:41-47).

The remainder of Mary’s sorrows occur with respect to the Crucifixion.  The fourth sorrow is when she encounters Jesus on the road to Calvary, carrying His cross.  The fifth sorrow occurs at the foot of the Cross, where her own heart, so joined to the heart of her Son, is pierced by the sword of His death.  When Jesus is deposed from the cross and is laid into the arms of His mother Mary, she suffers her sixth sorrow, as she embraces her Son for the last time.  The seventh of Mary’s sorrows comes when Jesus is laid in his tomb and the stone is rolled in front to seal it.

As we can clearly see, Our Lady of Sorrows, is a title that Mary has merited through a lifetime of unity with her Son in His salvific mission.  Her suffering began when He was but an infant and continued throughout her life, until His death by Crucifixion.