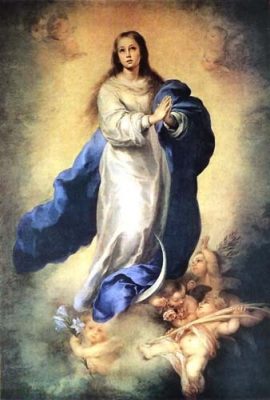 Today we celebrate the Feast of the Immaculate Conception of the Blessed Virgin Mary, the third of four Marian dogmas.  Unlike the previous two dogmas regarding the Blessed Virgin Mary, this dogma was not born of conflict over a heresy concerning Our Lord Jesus Christ.  It was not defined by a Council to safeguard the truths of the nature of Jesus.  No, this dogma was cultivated over hundreds of years of love for and discernment of Mary, the Blessed Mother of Jesus and Virgin Most Holy.  Pope Pius IX declared this dogma “ex cathedra”, that is, “from the chair”, out of pure love and joy for Christ and His most Holy Mother.

The faithful had long had a devotion to Mary under this title, but it is not until the 1800’s that heaven and the papacy cooperated to make this much hoped for dogma on our Lady’s Immaculate Conception a reality.  Heaven began the process in 1830 when Our Lady appeared to Sister Catherine Laboure, in the Chapel of the Miraculous Medal in Paris, France.  One of the requests of Our Lady was that a medal be struck bearing the invocation: “O Mary conceived without sin, pray for us who have recourse to thee”.  This became known as the Miraculous Medal for all of the miracles associated with it.  Here Heaven is clearly bearing witness to what the faithful “know” in their hearts is true, that Mary was indeed Immaculately Conceived.

In 1849, Pope Pius IX issued Ubi Primum, in acknowledgment of the outcry from the faithful, the clergy and the theologians for the dogma of the Immaculate Conception.  He asks the Bishops to promote the celebration of the Feast of Mary’s Conception and to ask for prayer and guidance on making the decision to declare the dogma.  He further asks for input from the Bishops regarding their thoughts on the declaration of the dogma.  In effect, Pope Pius IX is taking the pulse of the Bishops to gather consensus for the dogma.

Finally, on December 8th of 1854, although it has taken many centuries, all of the questions as to the “how” have been more that satisfactorily answered, the turmoil has been quelled, heaven has cleared the path, and with much joy and love Pope Pius IX issued Ineffabilis Deus where he declared, defined and pronounced the dogma of the Immaculate Conception of the Blessed Virgin Mary. Heaven ratified the pronouncement in 1858, just four years after the dogma was promulgated.  In Lourdes, France, Our Lady then appeared to Bernadette Soubirous and when asked by Bernadette her name, declared, “I am the Immaculate Conception.”